Starting a new job in a large retail unit would be a challenge for even the most experienced and confident of individuals. For the group of unemployed young people taking part in the ‘Help to Get into Retailing’ course at Parkgate Shopping it could rightly be described as a mountain to climb.

But at a special ceremony on Friday 7 November at Rotherham Town Hall to commemorate their achievements, Rotherham Lord Mayor, John Foden, Councillors and trainers all agreed that the young people are comfortably on their way to proving their worth to potential employers.

‘Help to Get into Retailing’ has been funded by British Land, owners of Parkgate Shopping, and run by The Source Skills Academy, to help 11 young people to find jobs at local retail stores.

Having completed their classroom studies with distinction, the group were assigned work placements at stores on Parkgate Shopping, and within a couple of weeks store managers were already praising their attitude and commitment to what for the majority was their first experience of retail work.

All the young people, have now either been offered work or have accepted further training opportunities.

During the ceremony, all the young people had to make a short presentation on their experiences and how they felt they had benefited from the programme.

“The course has given us a really fresh perspective, helped to boost our self-confidence, and given us the tools, and CVs, to develop our careers in retail,” said 23 year old Patrick Rowe from Eastwood on behalf of the whole group.

Denis Copeland, Regional Manager at Parkgate Shopping remarked: “5 weeks ago a group of young local people embarked on a very special journey. I can report with great pleasure that they have travelled a long way over that short period, and are a real credit to themselves and their families.”

Craig Loveday, Manager at ASDA Living on Parkgate Shopping, explains to Jane Griffin and Hollie Jennet where he would like them to place some strategic Halloween signage.

The young people celebrate their achievements. 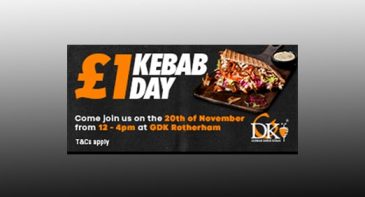